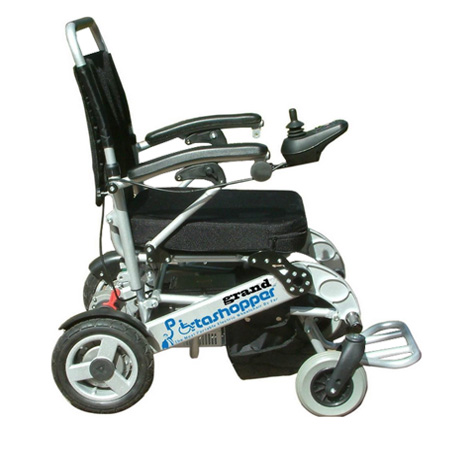 The Portashopper Grand is hailed as the ‘premium’ version of the portable electric wheelchairs sold by Portashopper out of Australia. This particular model has been developed to accommodate users weighing up to about 298 pounds. Beyond that weight, the chair may not be suitable in terms of its ability to maintain that weight, and the size of it may also not be accommodating to users who weigh more than 298 pounds, as the seating area is limited in size, to make it so the chair is still portable.

Let’s begin our review with the fabric parts to get those out of the way. To make these light weight and foldable electric wheelchairs be light weight, the manufacturers use very basic support straps to make up the underlying seating and back support areas, and then cover them with relatively simple cushions, which again do not weigh much. The materials found on this particular chair are the same as the materials found on others, such as the KD Smart Chair, the Air Hawk, and others.

The arm rests have a curve to them, which is an odd feature because if you look at your forearm, it is not curved. We find this to be a strange choice for the manufacturer, but it is seemingly a way to differentiate the arm rest material, which is still the same hard polyurethane foam pad, from other chairs, which use the same hard polyurethane foam pad but a flat version, in their design.

The front wheels are standard 7″ polyurethane foam caster wheels. Not much else to say about those – we’ve reviewed other chairs that utilize these same casters, as they are a commonly sourced part for these types of power chairs.

The rear wheels are a plastic 12″ wheels with small treading, thus making it a long lasting tire, due to its size, but it may be lacking for certain surfaces where a larger treading would be more suitable. For instance, the 12″ rear wheels on other brands such as the EZ Lite Cruiser Deluxe DX12 has much larger treading, which gives it great performance for outdoor areas.

The controller system is the same brushless motor controller system that is found commonly among a lot of the models, with the exception of the Air Hawk, which seems to have a different controller system — meaning the joystick and the actual computer that performs all of the driving functions. As we’ve already reviewed this controller system, we can say that it is adequate and works well in these light weight power chairs.

The unfolding action of this particular model is unique in that it is relatively quick, however, the folding takes a bit longer than the manufacturer had originally hoped, and as such, they went ahead and designed another very similar model, which Portashopper sells as a unit dubbed the ‘Portashopper 3’. If you’re considering one of these two models and not sure which to go with – they are virtually the same, except for the folding process which was made easier on the Portashopper 3, so save yourself the hassle and get a Portashopper 2 if you’re keen on ordering one of these models.

If you live in Australia, this is a no brainer — a local brand that claims to be able to support the products locally in Australia is your best bet. If you live in North America, we would advise considering a local brand to the United States, as it will be easier to service your model in the future, when the time comes. A lot of folks make purchases based on the overall features of these chairs but do not consider the long term ramifications of ownership. It would be best advised to order local, to be able to receive the support you need when it comes time. Imagine living in the eastern part of the United States on Easter Standard Time, and trying to call Australia on their time zone for support.