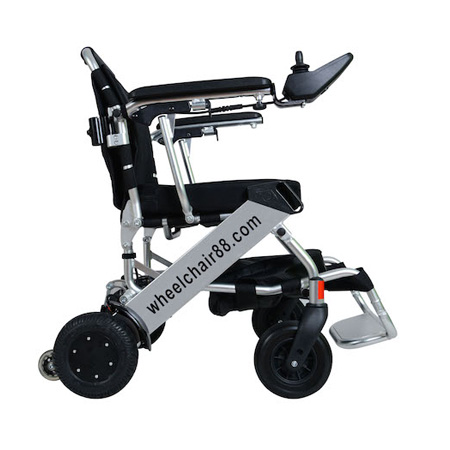 The frame of the Foldawheel PW-999UL is the same as the EZ Lite Cruiser – it has a wire which controls the folding aspect and when unfolding it, two pins in the rear of the device lock into place to keep it unfolded. Folding of this type of frame is much easier and quicker than other models like the Air Hawk or the KD Smart Chair, which require you to flip the arm rests around before folding, and then you have to push buttons to fold the top half of the back support. That is not necessary with the Foldawheel or the EZ Lite Cruiser for that matter.

The Foldawheel PW-999UL has a zippered full enclosed bag underneath the seat, where you can keep your personal belongings, or the charger. It is also a great place to store the Joystick, if you dismount it for travel.

The batteries on the Foldawheel PW-999UL slide into the side beam, and it is possible, with their dual battery connector (sold separately), to attach a second battery for double the distance. They claim that one battery will last up to 8 miles and they are not exaggerating – this is actually very accurate. So to get about 16 miles out of it, you would need two batteries. Like we mentioned, the batteries slide into the side beam, which is an intuitive place to put the batteries, but ask your self this — ‘what will happen if/when this product is no longer available or being sold?’ — and the answer is: you will find it impossible to find replacement batteries, and this device will be rendered useless. This should be an important factor when deciding which foldable power wheelchair you buy.

The front wheels on the Foldawheel PW-999UL are polyurethane 7.5″ in diameter and 2″ in width. They are quite durable and can withstand a good amount of impact. These are the same wheels found on the EZ Lite Cruiser, except they are black in color, while the EZ Lite Cruiser has gray ones. These wheels are much stronger than the caster wheels found on the KD Smart Chair and the Air Hawk – which are very small and flimsy. They can be problematic when riding over rough surfaces.

The rear wheels on the Foldawheel PW-999UL are a mix of polyurethane and rubber in a grey color. They are about 8″ in diameter and about 2.25″ in width.

The makers of the Foldawheel PW-999UL, namely Wheelchair88, has a good amount of accessories available for sale for it, and we appreciate that.

Overall, the Foldawheel PW-999UL is a good choice, as it is quick and easy to fold and unfold, and it has a good reputation. The only thing to be warned about is it will be shipped from Malaysia so it may take some time to arrive.